The Line (Witching Savannah, Book One) by J.D. Horn

The Line (Witching Savannah, Book One)
by J.D. Horn

I received this book for free in exchange for an honest review. The opinion in this review is unbiased and reflects my honest judgment of the book.

This is by far the hardest review I have yet to write. There were so many things that I really liked about the book, but a couple of things that really just sort of threw me. I’ve probably written a dozen different variations of this review over the last two days…and even while I write this one (that I swear to myself is the final one) the internal debate wages on!

The story itself was really good. A witch born into one of the most powerful witch families and she has no abilities…it seems her twin (fraternal) got them all. Mercy is the black sheep of her family and the matriarch has stopped at nothing to make her feel that way. Even the man who helped raise her makes her feel like “The Disappointment” of the family. Mercy is a likeable character. She’s snarky and doesn’t seem to take crap from anyone….in the beginning. There were points during the book where she came across as meek and mild; which really kind of threw me off. At other points, instead of being strong willed and having a “devil may care” type attitude, she was whiney and acted more like a fourteen or fifteen year old instead of an almost twenty-one year old.

And I love Savannah! There is so much history there that anyone who loves the paranormal feels like they are “home” the minute you step foot in old Savannah. There are enough ghost stories and twisted history to keep you entertained for a lifetime. So the setting of this story seemed very appropriate for the plot.

The only major drawback I had is there were just too many stories going on at one time. I understand that all of the things that happened were essential to the outcome; but, it almost seemed like this started out as a collection of short stories and were hashed together to create a novel. At one point I literally had to draw a diagram and family tree to keep up with what was going on. It seems that maybe this could have been divided into two books, the first of course would have had a cliffhanger to lead into the second….but it might not have been such family history/drama overload at that point. The sequence of events in this book was definitely a line of dominoes….and once that first one was tipped the whole line went tumbling down! I get that every single event was necessary to get us to where we needed to be… it just seemed to be too much for one book. It was kind of like trying to watch a year’s worth of a soap opera in one afternoon… your head is spinning at that point! And even with everything that was explained and all the secrets and lies that were exposed…I still don’t understand the whole point of one character in particular. Perhaps his involvement with the family will come to play in future books.

It certainly can’t be said that this book is in any way predictable! Once you thought you had it all figured out… BAM! There’s another twist thrown in there. I’m pretty sure we learned the dark, ugly truth about every member of the Taylor family.

I’m giving this book 4 stars…I thought about 3 because of the story overload, but I really liked this book! The characters are well developed (even though we did have some jumping around at the beginning with Mercy’s character and it seemed like the author was unsure how he wanted to develop some of the characters at the beginning…but they all fleshed out nicely in the end), once the plot got rolling, it was consistent and well thought out. Most of the characters were likeable and those that weren’t… well you weren’t supposed to want to like them anyway. I will be checking out the rest of the books in this series… just to see where the author leads Mercy and the Taylor family.

Savannah is considered a Southern treasure, a city of beauty with a rich, colorful past. Some might even call it magical…

To the uninitiated, Savannah shows only her bright face and genteel manner. Those who know her well, though, can see beyond her colonial trappings and small-city charm to a world where witchcraft is respected, Hoodoo is feared, and spirits linger. Mercy Taylor is all too familiar with the supernatural side of Savannah, being a member of the most powerful family of witches in the South.

Despite being powerless herself, of course.

Having grown up without magic of her own, in the shadow of her talented and charismatic twin sister, Mercy has always thought herself content. But when a series of mishaps—culminating in the death of the Taylor matriarch—leaves a vacuum in the mystical underpinnings of Savannah, she finds herself thrust into a mystery that could shake her family apart…and unleash a darkness the line of Taylor witches has been keeping at bay for generations.

In The Line, the first book of the Witching Savannah series, J.D. Horn weaves magic, romance, and betrayal into a captivating Southern Gothic fantasy with a contemporary flare. 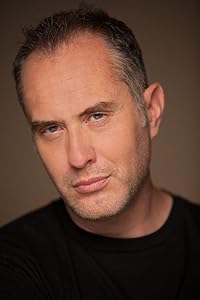 J. D. Horn was raised in rural Tennessee, and has since carried a bit of its red clay in him while travelling the world, from Hollywood, to Paris, to Tokyo. He studied comparative literature as an undergrad, focusing on French and Russian in particular. He also holds an MBA in international business and worked as a financial analyst before becoming a novelist. When not writing he is likely running, and he has race bibs from two full marathons and about thirty half marathons. He and his spouse, Rich, and their three pets split their time between Portland, Oregon and San Francisco.