Blood Relations: A Family By Choice Novel
by Caroline Frechette

I received this book for free in exchange for an honest review. The opinion in this review is unbiased and reflects my honest judgment of the book.

When I was first approached to give Blood Relations: A Family By Choice Novel I turned it down, thinking that I needed more time for zombies than vampires. I have not been impressed by very many vampire audiobooks in the past, but being the ever optimistic type that I am, I convinced myself that this could be good if I go into it with an open mind.

Blood Relations: A Family By Choice Novel was a look into the life of a young man, Alex, that has a special gift, some would call it a power or super power. The problem is that this young man has such a low self esteem and cares way too much about what other people are thinking about him and spends too much time scheming so people will like or accept him. I would think if I was so unique that I would be very outgoing and potentially fearless. Having been exposed to so many syndicate organizations via movies and television, the organization that Alex is involved with seems pretty tame. Struggling to keep control of the clubs they have while a rouge group of vampires come to town and try to get to the head boss. The driving force behind the whole story is Alex evolving out of a young man to an adult and encountering new situations and trying to make the best of it. I struggled to stay engaged while listening as I am used to more action, more deceit, just more.

While I totally understand why authors choose to narrate their works, I think it is a bad idea unless the author is experienced in vocal performing. I truly think that this book suffered considerably from the poor audio on the recording, making it difficult for me to fully pay attention to the story. I was able to pinpoint each stop/start of the recording sessions and I think at one point I heard a page turning and other background noise. I would have been able to get past that had the quality of the recording been better, maybe it was a low end microphone, not sure what the cause was but there was a low humming or buzzing throughout the whole audiobook. Now, Frechette's narration was not horrible, but there was little I could sink my teeth into. Characterizations were okay, very little emotional injection adding up to an almost monotone story telling, which could have worked.

Who cares if they're not normal? Neither am I. Life has not been easy for Alex Winters since he used his Pyrokinetic powers to take control of the Russian district. Violence and betrayal have become a way of life, but he's somehow managed to keep the gangsters in line. At barely sixteen, he thinks he's seen it all. He hasn't. Things spiral out of control when the latest double cross takes a turn for the supernatural. The new group muscling in on his territory turn out to be a brutal gang of vampires. Can Alex defeat an enemy even more powerful than himself? Can he keep his people safe and his boss happy? Can Alex survive in a world that just keeps getting more dangerous? 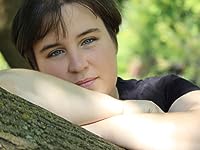 Caroline Fréchette is originally from Montreal, but has been living in the Ottawa/Gatineau region for the past 9 years. She is a sequential artist and author. She has published several short stories, both sequential and traditional, as well as two graphic novels, all on the French Canadian and European markets. She was the editor and director for the French Canadian literary magazine Histoires à boire debout, and works at the Ottawa Public Library. She has been teaching creative writing since 2005, and her first English novel, Blood Relations, was released in October 2013 through Renaissance Press. You can find out more about her and communicate with her by visiting http://carolinefrechette.com/